So, this guy on Twitter just so happens to run into Sergei Brin (co-founder of Google) in the New York City subways wearing the $1500 high tech glasses Google is promoting. 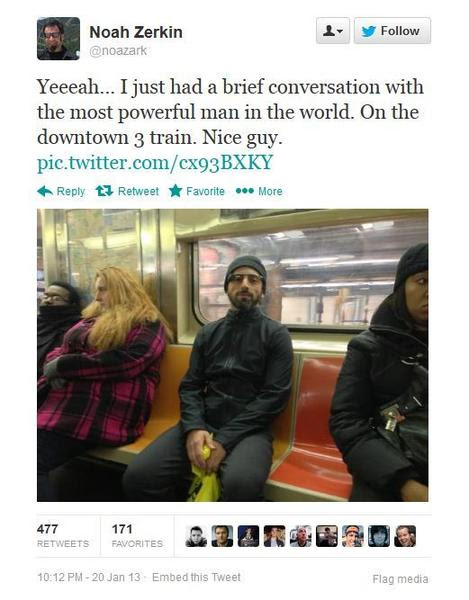 If you ask me, I don't think it's a coincidence.  I think it's staged, and this Tweeter Noah Zerkin and Sergei Brin are probably collaborators.

Think about it.  This tweet and picture has gone viral being picked up and spread by many news websites.  If my theory about this "run-in" is correct, Google just got a lot of free advertisement for this pair of high tech glasses they are pushing.  This is just something that Sergei Brin is brilliant enough to pull off and it's very characteristic of him to do marketing in such an unorthodox way.  It's also very characteristic of him to be unlike other billionaires in willing to ride the New York City subways.

My Spiritual Awakening, MLK, and Obama

Eleven years ago, on January 21st, 2002 (which also landed on a Monday like today that was also Martin Luther King's Day), I had a spiritual awakening. It was the first I had of its kind and I probably hadn't had one like it since.

Don't get me wrong. I've made a lot of spiritual progress since than, but that one was just so sudden and it came upon me with so much power and love from God. It was so needed as I was going through a major depression back then. (I've since spoken to someone who had been diagnosed with clinical depression and on medication. She told me that my case was worse than hers, and that if I would've sought medical attention, they would definitely have medicated me.) Anyway, that awakening brought me out of that depression without any medical attention or drugs. God can do amazing things.

Ever since that awakening, I've also been making progress in my life, in not following only what's "safe" but following God, and following what He has placed in my heart. I've made decisions that did not and still does not make sense to many (especially when many only know one way, one program,... with a one track mind. Not that that one track is wrong. When so many people follow the same track or same type of life, it's probably working (to a certain extent). But it's just not the only way or even the best way as most people think. Anyway, I digress.

Eleven years ago, when I had that abrupt awakening that God brought upon me, I was living by myself in San Leandro, California. The awakening came upon me shortly after 12am on 1/21/2002. Then I went to sleep probably with the best sleep I hadn't had for awhile up to that point. When I awoke in the morning, I drove down to the closest book store, Borders in Union City, and asked God to give me answers. (When I felt like I need answers, I go into a big bookstore, ask God to guide me, and start going through books. On that day of awakening in 2002, after going through a lot of books, two books captivated me on that day.  If I remember correctly, they were Not Your Mother's Life by Joan K. Peters and The Call to the Soul by Marjory Zoet Bankson.)

Despite gradual progress since then and despite having gone on a less traveled road, I still seem to have a long ways to go. Maybe you would like to hear me say that "I've come a long way" which may be true, but it seems to me that I have a much longer way to go. I won't say that I am tired but I do feel fed up on some days because I am not as far along as I had planned (although progress has been apparent).   Back in my awakening of January 21st, 2002, I did not know why God chose Martin Luther King's (MLK) Day to awaken me.  Since then, I can see a little bit more of why, but I probably do not know entirely yet why God chose MLK day And the mystery expands as this year, my anniversary of my spiritual awakening is again on a Martin Luther King's Monday and it coincides with Barack Obama's public inauguration of his second term as President of the United States.

Now I've been learning about Barack Obama even before he became President, just as I've been learning about a number of others who I consider to be iconoclasts (Sergei Brin, Larry Page, Rick Warren, Joyce Meyer, Steve Jobs, Taylor Swift, Matt Damon,...) From what I've read and what I've seen, Obama is someone I admire. (It doesn't mean I agree with everything he believes in his ideology, but I don't think there's anyone we can agree with entirely including those we admire or look up to.)  Well anyway (to conclude this journal entry), I will say that I've made progress since January 21st, 2002, but I have a lot more progress to make. May God bless me and be with me. I am sure more will be revealed in my life.


A small part of what I do is on the web for free to you.  If you like, feel free to check it out at:  SpirFit.org

Posted by Amadeo at 5:32 PM No comments:

Power You Can Rely On

“The keeping of a believer from the allurements and the deceit of the world is a supernatural task.  No man is smart enough to do it on his own.  Nothing else is sufficient, only the power of God can keep us.”  - Ray Stedman

The above quote from Ray Stedman is to remind us that just because we do our part, we must not be mistaken that we can do it all from our own power, because our power is limited without God (as hard as this may be for our ego to take.)
Ray Stedman in his sermon actually goes further into saying that the mistaken tendency of relying on one’s own strength is the downfall of Judas Iscariot (the one who betrayed Jesus.)  You can read or listen to Ray Stedman’s entire sermon on this at:

However, do not misunderstand.  This does not mean that you sit back and do nothing and let God do it all.  A father would not be a good father if he does it all for his children, and his children never learn.  In the same way, Our Heavenly Father is the Good Father requiring us to do our part.  We do our part, and God will do His part.  Just be sure we do not erroneously think that it is all in our power.  We need Him.

Posted by Amadeo at 2:27 PM No comments:

Twitter is one of the outside-the-box pioneering companies that we all can learn from.  Here's an interview of Twitter co-founder Biz Stone by Mediabrands TV.


Waterproof iPhones and bendable smartphones, more user-friendly
TV’s, iWatches (iPhone- like watches with iOS),
Wi-Fi connected eye-glasses, and phones that prevent texting while driving are
some of the items you may expect to be available in the market for the masses
in 2013.  More about it at: