Joke's on Her, Anjelah Johnson 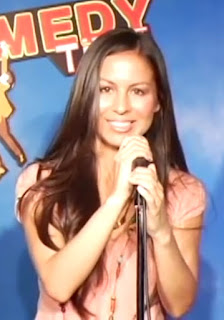 Anjelah Johnson was a cheerleader for the Oakland Raiders later turned standup Comedian.  In the past, she often made fun of Christian rappers for laughs.  Little did she know, joke's on her.


When she first told her family and friends about this guy and they asked her “What does he do?” she reluctantly answered, “Um, he’s a Christian rapper.”  That resulted in the biggest laughs.


As Anjelah Johnson now knows, God is probably saying, "The joke’s on you girl."  But she too is laughing happily.